What does music have to do with marketing?

At Marketing Refresh, music keeps us going. David’s a punk rock drummer. Aaron’s a bassist. Trey and Gary pick 6-strings. Terri is a behind-the-wheel singer, and I’m a Spotify addict.

We took this love for music, combined it with David’s graphic design skills and created one-of-a-kind laptop skins to look like our favorite albums. Here’s how they turned out and why we chose the albums we did. This album puts me back in high school every time I listen to it. And that’s a good thing.

When The Joshua Tree came out, there was nothing like it. The overall sound was unique, the songs had substance, and you could feel the passion the band had for each one. Plus, Bono is cool, and their music videos on MTV were visually engaging.

Overall, I respect U2 as a band. They’ve stuck together in an impossible industry, have stayed true to themselves, and haven’t had any major drama causing them to implode.

And don’t you want to hang out in those mountains with them?  – Terri Hoffman

The Clash was my first real exposure to the raw side of rock ‘n’ roll. When I heard London Calling, I was floored. It was punk, my flavor of choice, but it had all these other styles on the album too. It wasn’t just one thing, it was everything, and my life would never be the same after hearing it.

This band, and this album, in particular, activated creative senses within me, and in a lot of ways, played a huge part in my interest in graphic design. From the repurposing of an Elvis album cover to the homemade styling’s of their punk fashion, I knew I wanted to make something from nothing that could have impressive and lasting effects.

So, to The Clash, I tip my hat, raise my horns and say, “long live rock ‘n’ roll, and God save The Clash!” – David Klotz I like rap music, and this album has it, isn’t the illest answer. To give respect to the first rap album to reach a No.1 spot on the Billboard 200 chart, I’ll do better.

I chose Licensed To Ill because it combines hits like Brass Monkey, Fight For Your Right, and No Sleep Till Brooklyn with a creative cover.

The cover art highlights disaster, happiness, and humor with one image. It pays tribute to The Day That Music Died, shows the rock star status they hope to achieve, and is funny because it’s their first album, so having a private jet is ridiculous.

As a copywriter at Marketing Refresh, It’s my job to catch people’s attention. The Beastie Boys did that with this album, and that’s why I chose it.   – James Mann 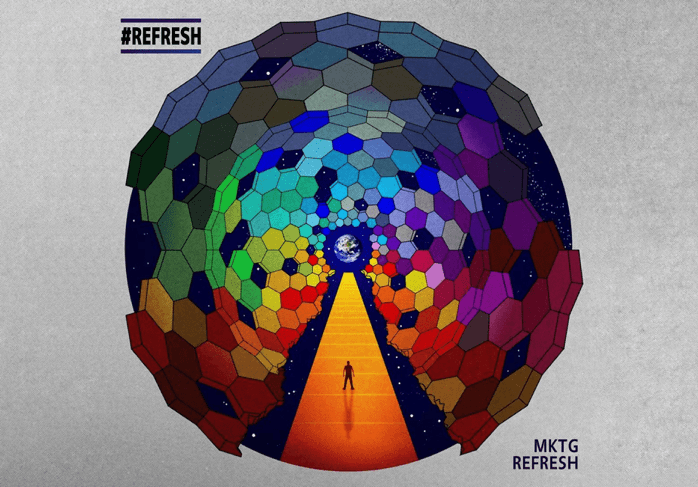 First of all, as a HUGE music lover, it’s exceptionally hard to pick your favorite album cover of all time. In fact, it’s almost impossible… almost!

Anyone that know me knows I’m a country music fan, but I also have a rocker side.  And let’s face it… when you’re thinking of best album covers of all time, there aren’t too many country albums that come to mind.

Therefore, I chose “The Resistance” by MUSE not only because I love their infectious rock grooves, but there’s seemingly just as much creativity in their album cover as the music itself.

This particular album resonated instantly with me because of the vivid colors and 3D effect it gives off. All-in-all it’s thought provoking, full of colorful facets and represents a journey. And that’s what I think of when I think of Marketing Refresh.  – Trey LeBlanc This was an exercise in finding a visual and audible statement not only reflecting my taste in music but my personality. I enjoy multiple forms of music and regularly play vinyl in my home.

Led Zeppelin has remained one of the most inspiring and influential rock bands in history. The four-piece configuration would become the template many future bands were built upon, and the deceptively simple, yet powerful sound produced by these four guys remains the rock standard.

For me, this album captures them as they were still catching fire, but having not fully realized their potential. The album cover itself depicts in black and white the Hindenburg airship just seconds after catching fire. The image refers to the origin of the band’s name, in which Jimmy Page, Jeff Beck, Keith Moon and John Entwistle were discussing forming a group, and Moon joked, “it would probably go over like a lead balloon”, and Entwistle replied, “a lead zeppelin!”  – Gary Griffin

ColdPlay- A Rush Of Blood To The Head Whether it’s scribbling a lyric in a notebook, humming a melody to record on my phone or plugging in and grooving on my bass, music is a driving force in my life.

I chose Coldplay’s A Rush of Blood to the Head because it inspired me in many different creative ways. I remember the first time I saw Coldplay perform, it was an amazing experience to look across a sea of people and witness a 6 year old and a 60 year old (and everyone in-between), from different walks of life coming together to sing these melodies. Their songs knew no boundaries, and were something fresh and new.

I’ve always been a fan of the Euro-rock style of music, and whereas it’s tough for me to ever really pick a favorite record, this one stands out as one of my top picks.  – Aaron Eaves

…So Here’s The Gist

While the majority of our time is spent helping clients, creative side projects are unavoidable. This one was too cool not to share. We gave you a taste of the music we like, showed you some of our design capabilities and hopefully encouraged you to put on some tunes today.

Tweet Us, and let us know what you’re listening to.